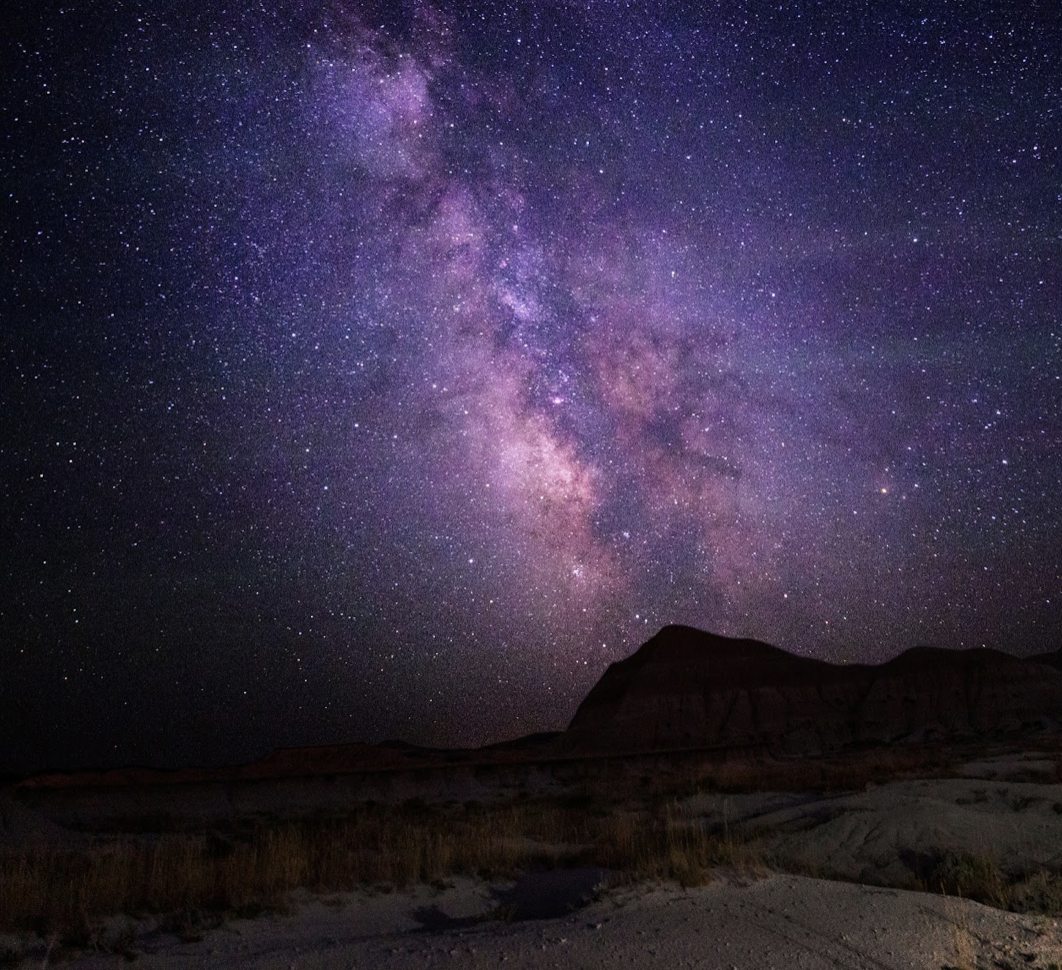 Driving through the Northwestern region of Nebraska is eye-opening offering a variety of splendid sights. The 37th state to have a star added to the American flag back in 1867, is one of the best spots in the U.S. for stargazing.

Since the towns are more spread-out, on a clear night, the sky is incredibly dark with limited or no light pollution. One of the most special spots offering an incredible nocturnal environment is Merritt Reservoir State Recreation. This area above the town of Valentine, recently received the 200th certified Night Sky place by the International Dark-Sky Association. Working to protect the night sky for present and future generations, this prestigious certification is only given to land possessing an exceptional quality of starry nights that is specifically protected for its scientific, natural, educational, cultural heritage, and public enjoyment.

Merritt Reservoir is home to the annual Nebraska Star Party in August every year. The Merritt Reservoir’s Snake Campground offers astronomical views, and has one of the biggest swatches of minimal light pollution in the US, in which about 80% of North America can no longer see the Milky Way.

According to Jenna Bartja, Adventure Travel Specialist at Nebraska Tourism, dark skies are very important. She shared some insight on what it takes to be a designated dark sky location. She said the site must comply with IDA guidelines for whichever designation it is pursuing. A key consideration is that the area must show that it is an exceptional dark sky resource relative to the lands and communities that surround it. More specifically, typical nighttime conditions characterizing the site must be consistent with or exceed the following criteria:

1. The Milk Way is readily visible to the unaided eye.

3. Any light domes present are dim, restricted in extent, and close to the horizon. 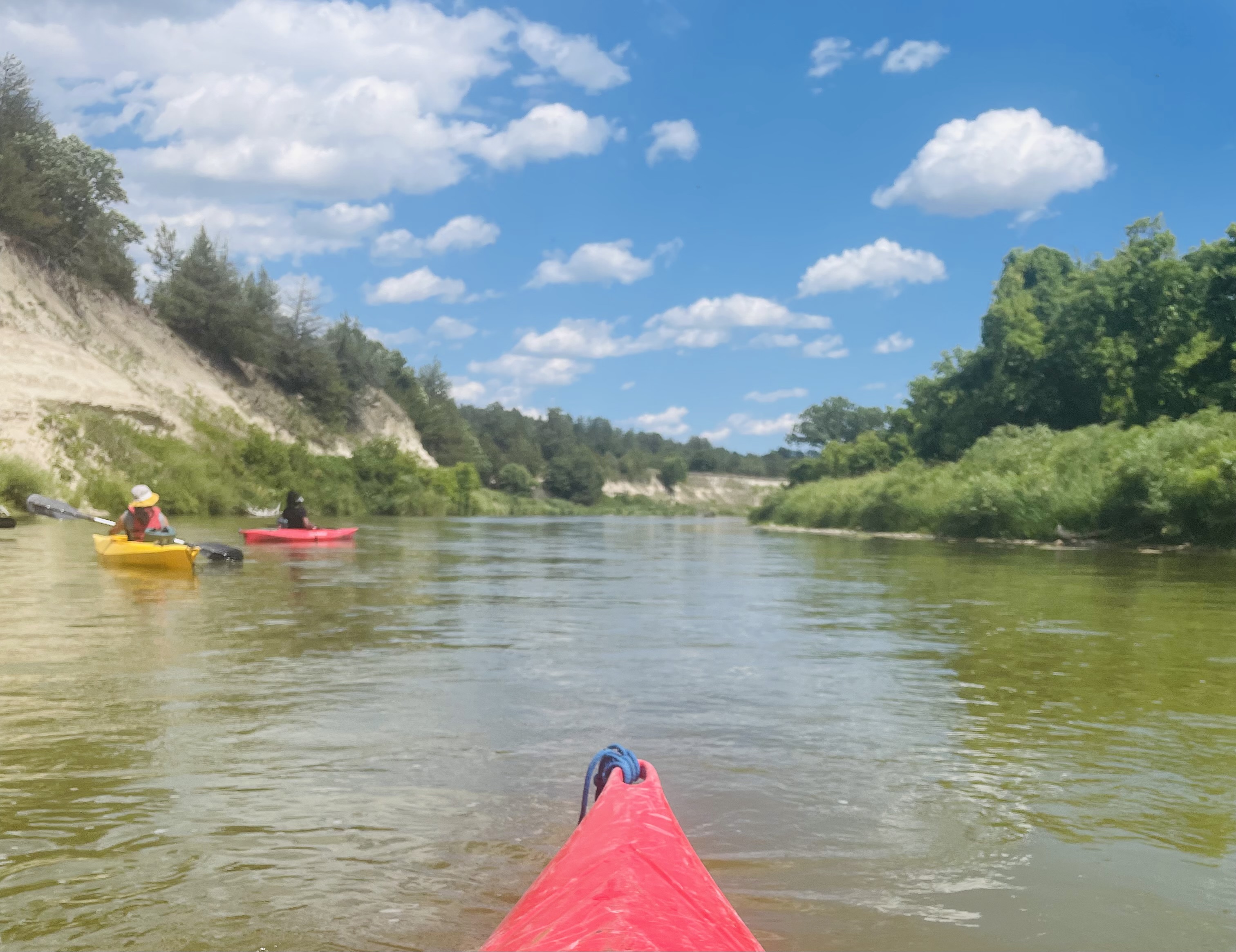 For those not camping overnight, The Niobrara Lodge in Valentine is a clean and comfortable hotel to stay overnight while attending the Night Sky Party.

During the day, it’s a short drive to Niobrara River offering spring-fed water, sugar sand beaches and Smith Falls State Park. Little Outlaw Outfitters provides kayaks, canoes, and tubes to paddle or float down the scenic river to the highest waterfall in the state. Smith Falls is named after Frederic Smith, who filed the first homestead patent on the land that encompasses the falls, and later this area became a state park in 1992.

Not only is the land home to towering falls, but it is also an area of biological significance where several ice age species can still be found.

Be sure to dine at Old Mill for their brick oven pizza, salads and hearty sandwiches. They also offer an array of bulk food items, bakery, coffee and gifts. For steaks and burgers Peppermill Restaurant in Valentine is ideal for dinner. 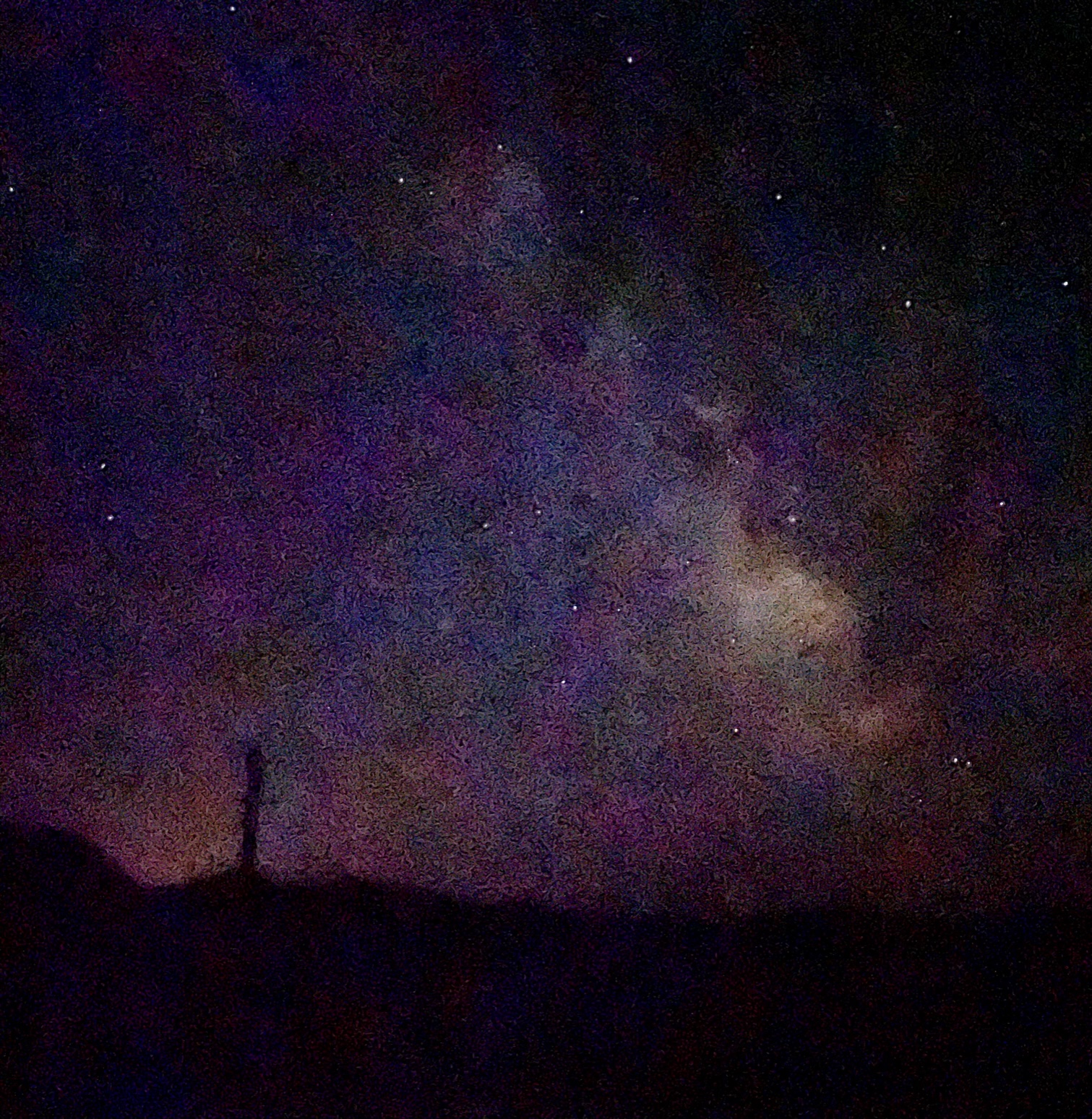 Other sites in Nebraska that offer dark skies for spectacular star gazing include Toadstool Geological Park. Named after the unusual toadstool geological formations, this area offers fossils that have provided scientists insight into the behavior of animals who passed through this area some 30 million years ago. 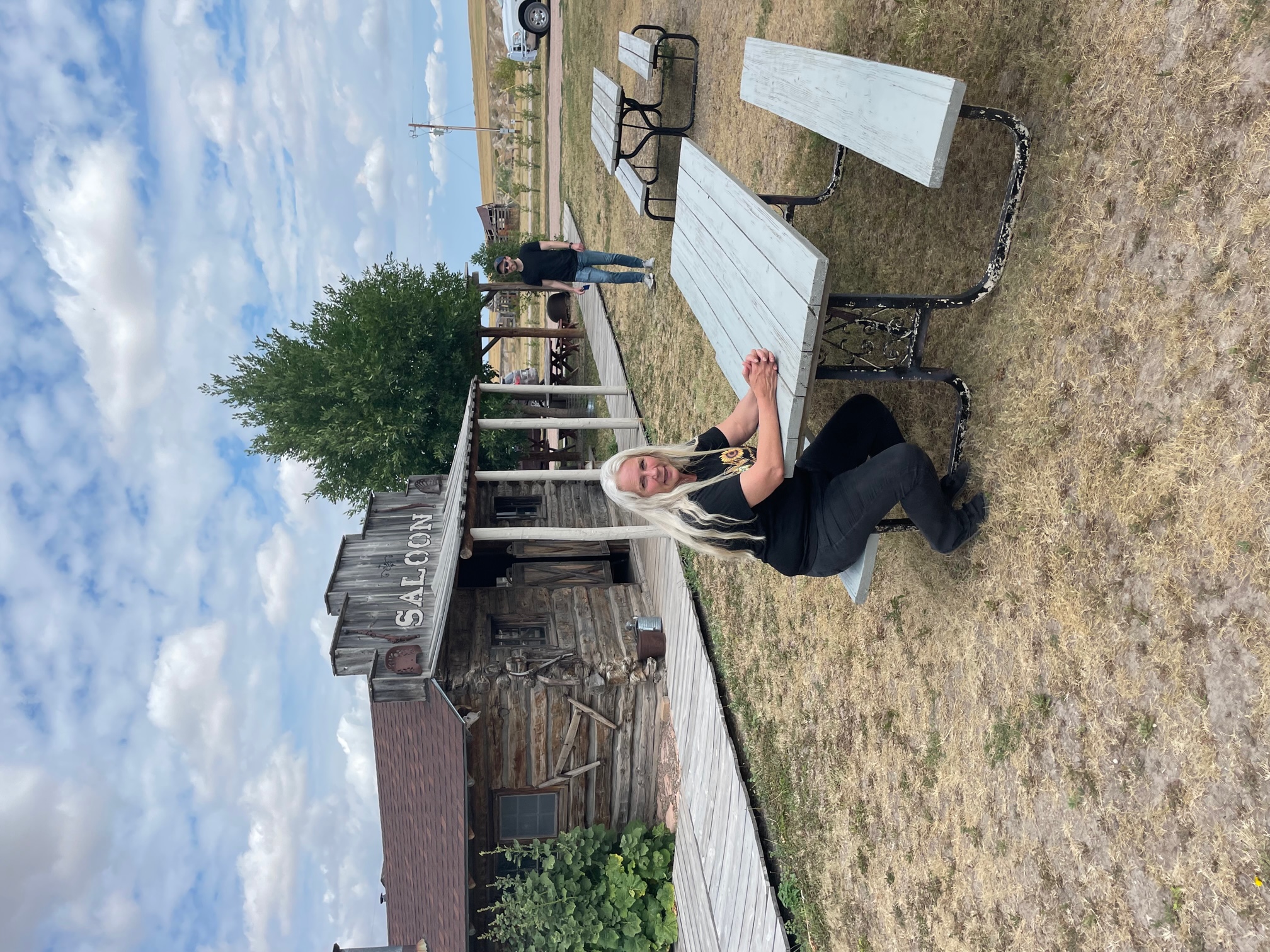 Stay at Our Heritage Ranch in nearby Crawford, and host Jean Norman will set you up in guest quarters at her working cattle ranch. Her family homestead is a National Natural Landmark, and her ancestors were provided this land by the federal Homestead Act of 1862. They were originally granted around 160 acres to settle on and farm the land. Now she raises cattle and horses, plus provides guest lodging among the unique landscapes. The land has some pine covered hills meeting prairie and badlands. It’s a unique wedding, family reunion and wellness retreat.

Her neighbor Heather down the road at High Plains Homestead offers accommodations ‘Out of the way and out of the ordinary.’ It’s a fun Old West theme glamping adventure with a saloon, fossil shed, and Badlands Mercantile. Just three miles away is the modern archaeology excavation site at Hudson-Meng Research and Education Center. Located in the Oglala National Grassland, visitors can tour one of the most important paleo-archeological discoveries in North America. There are multiple bone bed enclosures displaying ancient skeletons of approximately 600 bison. They aren’t the same species of bison that exist today; these animals lived tens of thousands of years ago on the American plains and mysteriously died here. 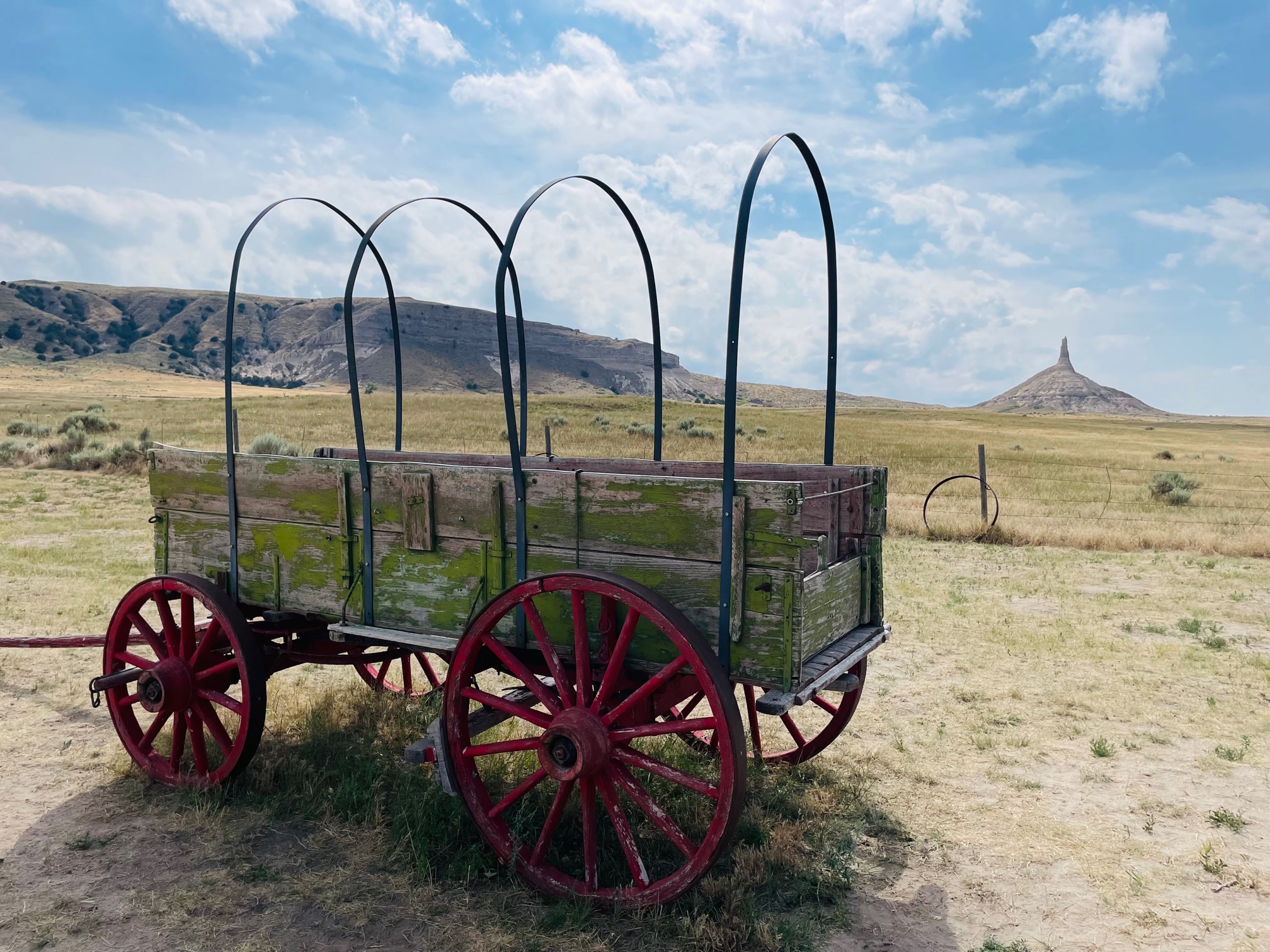 Another popular Night Sky destination is Scotts Bluff National Park. Arrive early and visit a geological marvel, Chimney Rock National Historic Site. Rising 300 feet above the surrounding North Platte River Valley, there is an interactive Visitors Center to learn about the brave pioneers who traveled through this land on their way along the Oregon, California, and Mormon Trails.

About 30 minutes from Chimney Rock is Papa Moon Winery & Cider House offering a family-friendly environment, wine and cider tour. Visitors can order house-crafted cider and wine tastings to enjoy outside on the beautiful grounds.

For dinner, The Steel Grill in the town of nearby Gering, is a lively tavern offering American BBQ, prime rib and steak salads. Another dining spot is Flyover Brewing Company. It’s the first brewery in the Nebraska Panhandle and offers great beer and food.

The Monument Inn and Suites is a good home base for an overnight stay. It’s a short drive to Scotts Bluff National Monument. Towering 800 feet above the North Platte River, Scotts Bluff also served as a directional landmark to Native Americans and emigrants. There are nearly 4 miles of hiking trails, and a 1.6-mile drive up to Summit Road to take in the panoramic views on top. 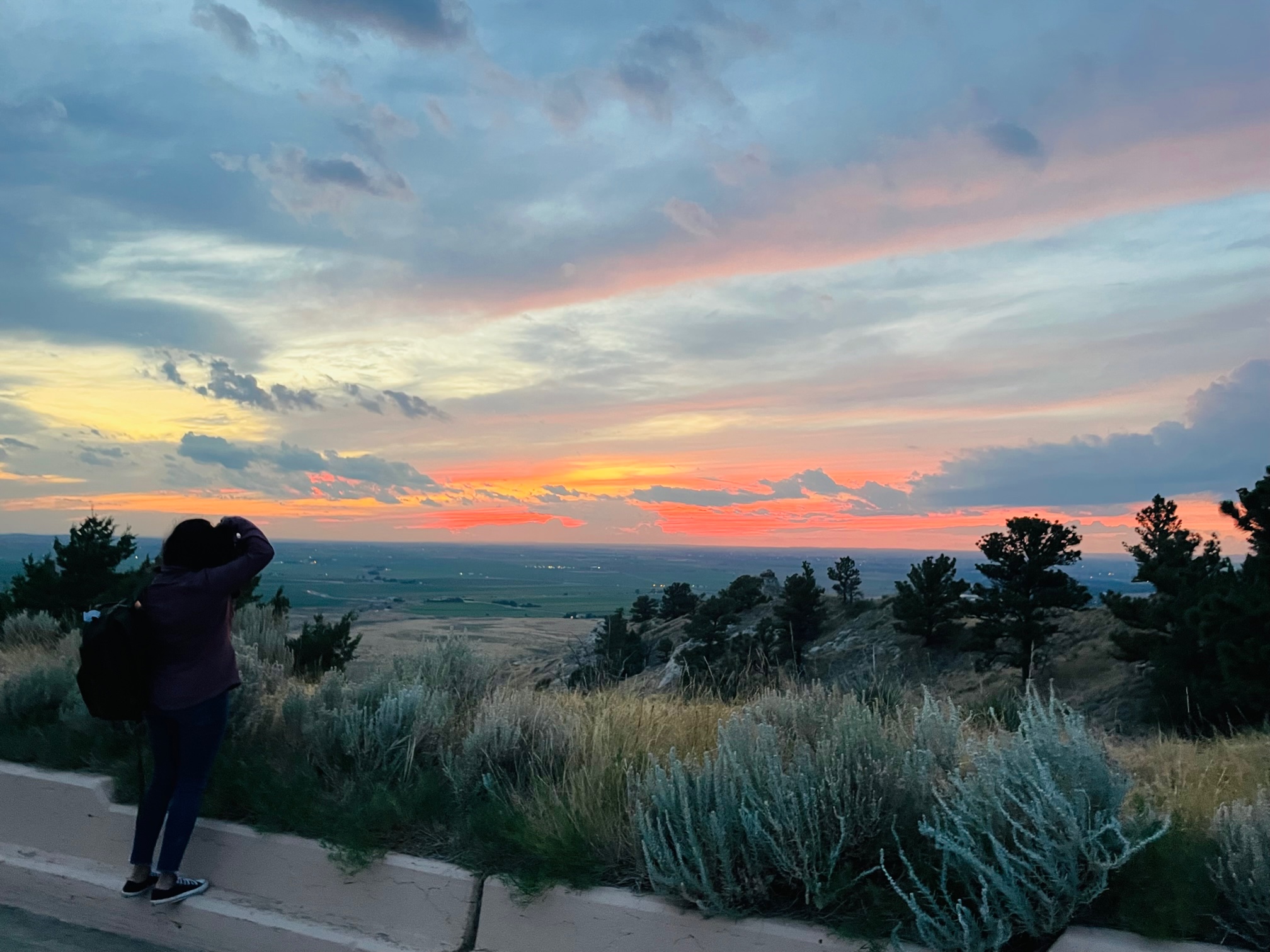 In the morning dine at The Mixing Bowl for breakfast before driving home or to the closest airport. Owned by Jamie Meisner, she enhances traditional Midwest dishes with a German flair.

The next  30th Annual Nebraska Star PartyJuly 16 – 22, 2023. To learn more Visit Nebraska offers a guide of scenic byways to drive, interesting places to stop, stay, see, and some great culinary places to dine and drink.

6 Things You Need to Know About Illinois